During the Summer of 2010 a formal affiliation between the Worshipful Company of World Traders and The Rifles, the Army’s largest infantry regiment, was established. The affiliation runs through 1st Battalion The Rifles (1 RIFLES), based near Chepstow.

The Rifles regiment traces its history and traditions back to the skirmishers of the Peninsular War. At a time when the majority of infantry formed up in line using the musket and wearing red coats, The Rifle Brigade (as was) became the first to wear tactical green uniforms and use more accurate hunting rifles (and later the Baker Rifle). 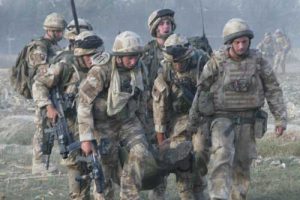 The Rifles, whose motto is ‘Swift and Bold’, is characterised by its regimental ethos of a constant pursuit of excellence. This is combined with a relaxed relationship between all ranks, who are all known as ‘Riflemen’, and a no-nonsense approach to getting the job done. More visible, and audible, characteristics are: the use of the silver bugle to pass orders, even today in barracks; the spelling of Serjeant with a j rather than a g; and their dark rifle-green berets and ceremonial uniforms. Rifle regiments traditionally did not advertise their position to the enemy by carrying flags or colours, and the same tradition is continued today, with Battle Honours being entrusted to each Rifleman and displayed on their ceremonial uniform. On parade the Regiment is distinct, executing ‘light’ drill movements: Riflemen carry their weapons at the trail (by their sides) rather than at the shoulder and march at a rate of 140 paces to the minute, considerably quicker than regiments of the line.

Riflemen from 1 rifles in combat in Garmsir, Operation Herrick 9, Afganistan.

The Rifles was formed in February 2007 from amalgamation of The Devonshire and Dorset Regiment, The Royal Gloucestershire, Berkshire and Wiltshire Regiment, The Light Infantry and The Royal Green Jackets. The Rifles is the largest infantry regiment in the Army and recruits nationally, whilst focusing on its antecedent regiments’ historic centres of gravity. It has 5 regular battalions and 2 reserve battalions as well as a raft of Army Cadet Force and Combined Cadet Force detachments and a healthy veterans community of former members of the current and forming regiments.

1 RIFLES, commanded by Lieutenant Colonel Charlie Grist MBE, is based at Beachley Barracks near Chepstow as part of 160th Infantry Brigade. 1 RIFLES is part of the adaptive force, rapidly deployable and honed for light force excellence. Throughout 2015 1 RIFLES is part of the Vanguard Armoured Infantry Brigade, on high readiness to react and respond to crises around the world. For the first 7 years of its existence, 1 RIFLES operated under command of the Royal Navy within 3 Commando Brigade, with whom it undertook 2 challenging tours of Afghanistan in the winter of 2008/9 and the summer of 2011. 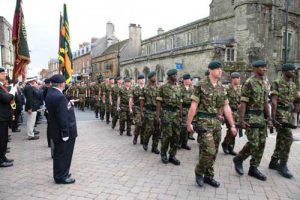 Riflemen from 1 rifles exercising the Freedom of Shaftsbury, march with rifles at the trail. Shaftsbury, Dorset.

In 2013-14, the 1st Battalion sent training teams to Mali for a 12-month operational period within the European training mission. Teams worked for 6 months tours to train and develop the Malian Armed Forces to deal with the Islamic insurgent threat in the north of their country. More recently, 1 RIFLES contributed a small detachment to operational training in Ukraine and the Battalion plans to exercise there in coming months, as well as in Slovenia and Croatia.
Within the UK, the Battalion played a large part in Op OLYMPICS in 2012 and provided the military security force at the NATO summit in Newport in 2014. Recent overseas exercises have seen 1 RIFLES’ Riflemen training in Kenya, Jordan, the United States (in New York State), Germany and elsewhere, as well as hosting US, Indian and Kazakh soldiers for joint training in the UK. 1 RIFLES has an enduring relationship with the military forces of Central Asia and has run several training events to assist Kazakhstan’s army in preparation for potential UN peacekeeping operations. 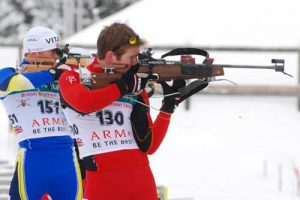 The Battalion has a strong shooting team (narrowly placed second in the Army in 2014) and has been the tri-Service sniper champions in 2013 and 2014, as well as placing 3rd and 4th in multinational sniper competitions in Kazakhstan (firing borrowed Kazakh weapons) and the US.