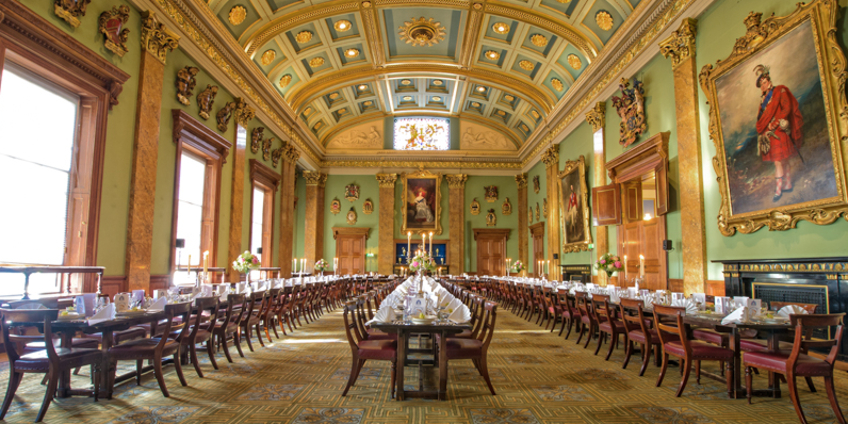 The World Traders’ banquets are splendid affairs and this one rose to the occasion in the setting of the huge Fishmongers’ Hall located close to London Bridge.

The Banquet followed a Ceremonial Court at which incoming Master Wendy Hyde CC took over from Mark Hardy who received the badge of Immediate Past Master, in which role he will chair the Company’s Trustees. Robert Woodthorpe Browne MBE became Senior Warden and Alderman Professor Michael Mainelli received his badge as a Junior Warden.

Also at the Court, 5 Freemen became Liverymen and 13 new Freemen made the declarations required of them. The Company is attracting many enthusiastic new members.

The Master and Wardens received some 220 members and guests, only slightly below the capacity of the Hall. Guests could admire the anterooms as well as the stunning main hall with its portraits of royalty. All over the ground floor are the escutcheons of past Prime Wardens (the designation of the Master Fishmonger).

The seating of so many people is a tribute to the well honed organisational skills of Clerk Gaye Duffy. Food and wines were first class.

Several Masters of other Companies were on the guest list, and the City’s newest Alderman, Robert Howard of Cornhill Ward also attended.

The Master’s speaker was Dr Andrew Sentance, now the senior economic of PwC and previously a member of the Bank of England’s Monetary Policy Committee. An amusing and thoughtful speech followed by an unexpected turn on the piano, to the light of guests, who until then had enjoyed the talents of a young harpist.

The evening ended with an excellent stirrup cup, providing those present with a further chance to mingle with those they had not sat near or talked to at the Reception.