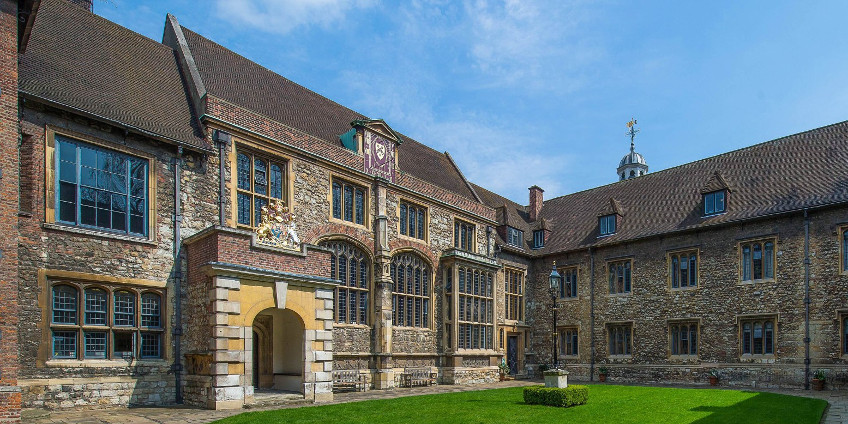 The Master’s at Home was the final event of the Master’s year in office before she handed over to the new Master.

This year, the At Home was held in the historic surroundings of The Charterhouse. A Carthusian Monastery was established on the site in 1371 and a prior and twenty-four monks were accommodated in two-story houses arranged around a large cloister. The monastery became an important centre of ecclesiastical learning. Thomas Moore, ‘A man for all seasons’, friend of Erasmus and later Henry V111’s Chancellor, frequently visited Charterhouse as a young student. After the dissolution of the monasteries a Tudor mansion was built on the site and it was here that Elizabeth 1 stayed for 5 days at the start of her reign before proceeding to the Tower of London and her coronation in Westminster Abbey. On succeeding to the throne in 1603 James 1 came to The Charterhouse from Edinburgh and held his first council in what is now the Great Chamber.

The Charterhouse is now a charitable foundation originally endowed by Thomas Howard, first Earl of Suffolk to provide for the education of boys and the care of elderly men, known as Brothers. The school moved out many years ago but the Brothers are still in residence. Two of them were interesting and well informed guides to the parties of World Traders who choose to take a tour of the site before the start of the reception.

The reception was held in the Great Chamber where World Traders and guests enjoyed a sociable end to the Master’s year. The Master thanked the Wardens, Committee Chairmen and all the other company members whose hard work had contributed to an interesting and successful year for the Company