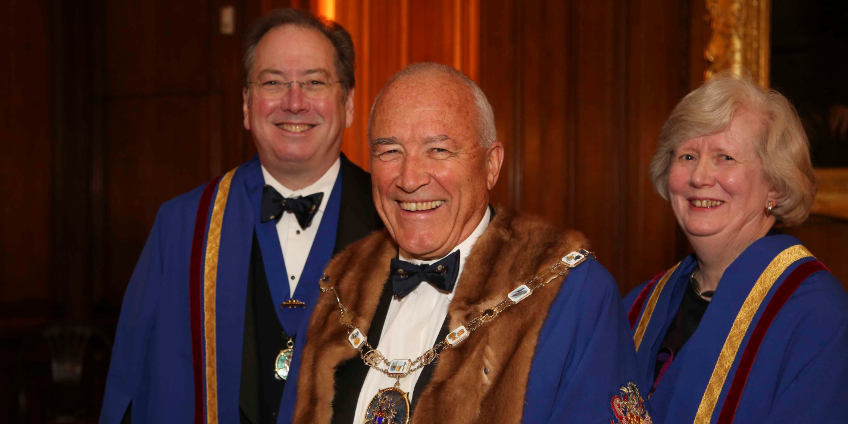 It is several years since the World Traders dined at the magnificent Hall of the Merchant Taylors, with its famed garden, now covered by a tent-like structure for use in the colder months. Merchant Taylors rank 6th and 7th in the Livery Precedence, swapping rankings with the Skinners in mid-year at a special Ceremony in front of the Lord Mayor.

A well-attended Ceremonial Court saw Wendy Hyde CC invest her successor, Robert Woodthorpe Browne MBE with the Master’s Badge of Office. He in turn invested Alderman and Professor Michael Mainelli as Senior Warden and Dr Edwina Moreton OBE as Junior Warden, before and investiture of a Liveryman and Freemen.

The Guest of Honour at the Installation Dinner was Sir David Brewer KG, Past Master Merchant Taylor, former Lord Mayor and Lord Lieutenant of London, a colleague of the Master’s when they both worked for the insurance broker Sedgwick.

Special guests were representatives of our military affiliations: HMS Dauntless, No.1 Rifles and 28 Squadron from RAF Benson.

The Master’s guests included the Masters of the Saddlers, Gardeners and Chartered Architects Companies and their ladies.

The unusual menu included grouse, and the catering was universally acclaimed.

Court Assistant Sue Algeo proposed an amusing toast to the guests. Sir David is well known for his wit, and certainly did not disappoint, including an anecdote about Lady Sarah Traill, wife of Past Lord Mayor Sir Alan Traill another former colleague of the Master’s) who had shamed the Merchant Taylors into including ladies into their previously men-only repasts.

The Master’s speech prepared the Company for the year ahead, on the theme of London’s markets and world trade. Visits are to be paid to the Museum of London (Docklands) and the National Maritime Museum; Lloyd’s of London; the London Stock Exchange; the Baltic Exchange; the London Metal Exchange; and a Digital Trading Room. Foreign trips will be to Zurich for the Sechsalautern Parade; a long weekend in Hamburg; and a trip to the Douro River and Oporto.