Visit to Lloyd’s of London 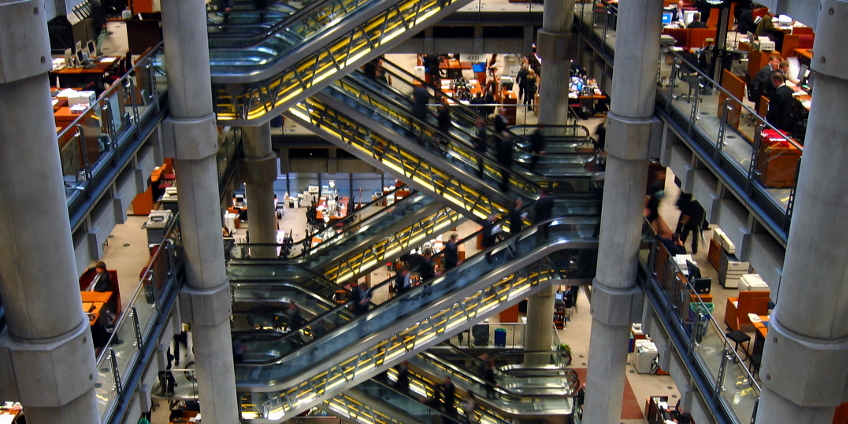 The first of several visits planned under the title of ‘London and its Markets’ – the Master’s theme for his year – was to Lloyd’s. Over 40 World Traders and guests took part in a slickly organised event that consisted of a conducted tour followed by lunch and briefing, or the lunch and briefing followed by a conducted tour. This allowed the maximum number to be accommodated.

There is no public access to the interior of the Richard Rogers-designed 1986 Lloyd’s building in Lime Street so this was a rare opportunity not only to experience at first hand the impressive scale of the vast atrium but to learn what goes on inside. In essence, the function is the same as was carried out at Edward Lloyd’s coffee house in 1688 when marine insurance could be said to have begun. Vessel owners and seafarers would meet to exchange news of ship movements and arrange insurance for vessels and cargoes.

Even some of the terminology has been maintained including of course the name. We learnt that Underwriters still occupy ‘boxes’ on the four underwriting floors. In the original coffee house they leased boxes (booths) from Edward Lloyd to justify sitting there all day doing business (after all there is only so much coffee that even a caffeine-dependent underwriter can drink). The liveried staff are still called ‘Waiters’ – the Head Waiter being responsible for tolling the Lutine Bell and writing up the ‘Loss Book’ in elegant copperplate using a quill pen.

The background, as with many other City institutions, is fascinating and quirky. Nevertheless, the story is one of survival and successful adaptation to changing circumstances. To demonstrate this there were two excellent presentations, the first by independent consultant Peter Cave who talked about the history of Lloyd’s illustrated by slides and anecdotes, and Dominic Christian, Chief Executive of Aon who discussed some of the challenges faced by the modern market. The Q&A session was moderated by the Master, Robert Woodthorpe Browne, himself a luminary of the reinsurance sector. They all exuded genuine enthusiasm, pride in the Insurance market and Lloyd’s in particular.

This World Trader came away with a better understanding of Lloyd’s, its history and its functions and a mental picture of be-suited brokers endlessly ascending and descending the transparent escalators in search of underwriters’ signatures for their slips. As far as the building is concerned: like it or loath it, in 1986 it represented a bold statement of confidence in the future. Given the grave uncertainties that afflicted the market in the late 80s and 90s it might also have been a hubristic one. But it was not, and over the last thirty years Lloyd’s has maintained its strength and enhanced its reputation as the foremost insurance market in the world.

We must thank the speakers mentioned above plus the Head Waiter and Peter Fletcher who conducted the morning and afternoon tours respectively.