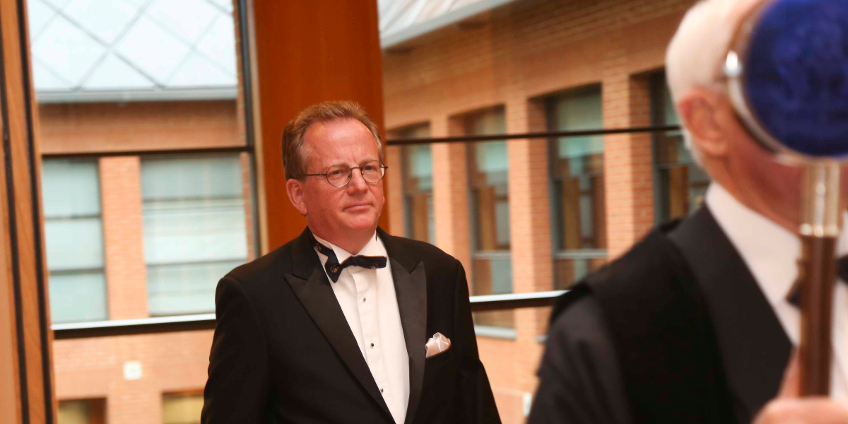 Held at the Haberdashers’ Hall, this impressive modern building featuring rather stark brickwork, but typically of Livery company halls somewhat hidden away, provided a warm venue on what was a cold evening.  The Master Robert Woodthorpe Browne welcomed one hundred and fifty members and guests including the Masters of the Marketors’, Plaisters and Carmen’s companies.  He announced that Michael Mainelli will succeed him as Master for the year 2017-18.  The Senior and Junior Wardens will be Edwina Moreton and Peter Alvey respectively.

A beautifully prepared and served dinner imaginatively featured roast quail and was accompanied by excellent wines from Gascony and Galicia.  This was followed by particularly enjoyable speeches and entertainment.  The toast to the guests, and in particular the guest of honour, Alexander Downer her fellow countryman, was elegantly proposed by Pauline Lyle-Smith.

When it came to his turn to reply the Honourable Alexander Downer AC, Australian High Commissioner, thanked the British for ‘helping to create the greatest country in the World’.  This set the tone for gentle ribbing with references to the recent success of English cricket and rugby teams – now that they are coached by Australians.  Nevertheless it soon became obvious that he has a great affection for this country  mentioning that his father had been High Commissioner at the time we joined and voted to stay in the ‘Common Market’, precursor to the EU in the 1970s.  In his response the Master graciously thanked the High Commissioner and perhaps wisely resisted the temptation to try to ‘follow that’.

After-dinner entertainment was provided by harpist Rebecca Toal and the lively acapella group Over the Bridge.  After a stirrup cup members and guests drifted out into a still-cold night after a thoroughly enjoyable and successful evening.