Jailed and Bailed for the British Red Cross 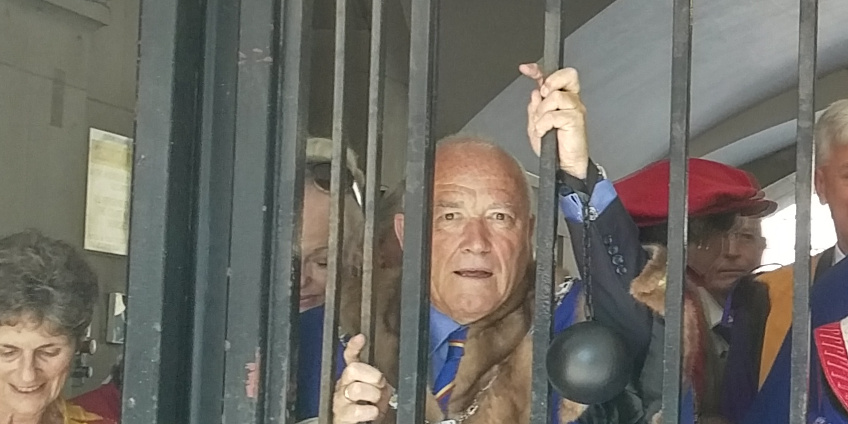 It was clearly time that the City’s Livery Masters were locked up! The British Red Cross runs an annual event whereby evidence of their misdeeds is collected from totally unreliable sources (Clerks, fellow Liverymen, family and ‘friends’) to compile a charge sheet.

As Mansion House was closed out of respect for the Grenfell Tower disaster, some 30 Masters in their warm robes crammed into a Court at the Old Bailey where a bewigged Sheriff Peter Estlin read out the charges to each, and, acting as judge and jury, condemned each unfortunate to life imprisonment in the Tower of London.

Masters were then escorted to a vintage Routemaster bus, still gowned but with a ball and chain attached to their wrists, for the journey to the Tower, where a Yeoman Warder with an axe (which he alleged had last seen service on Lord Lovat’s neck in 1822), passed gawping tourists, to the Fusiliers HQ. As the temperatures were in the 30s, Masters regarded disrobing as the best release on offer.

Also jailed was the representative of a major Champagne house, who managed to arrange an appropriate water substitute.

After a light lunch, Masters were fingerprinted and allowed to produce their bail money. The Master World Trader produced £500 and fellow World Traders, wishing to avoid the ignominy of an imprisoned Master, generously contributed a further £1000 in aid of the British Red Cross, to which they cleverly addressed their cheques to avoid the felon adding one more crime to the charge sheet.

In total, the event raised over £34,000 for the British Red Cross, so prominent in the aftermath of the Grenfell Tower fire and the Manchester and London terrorist outrages.