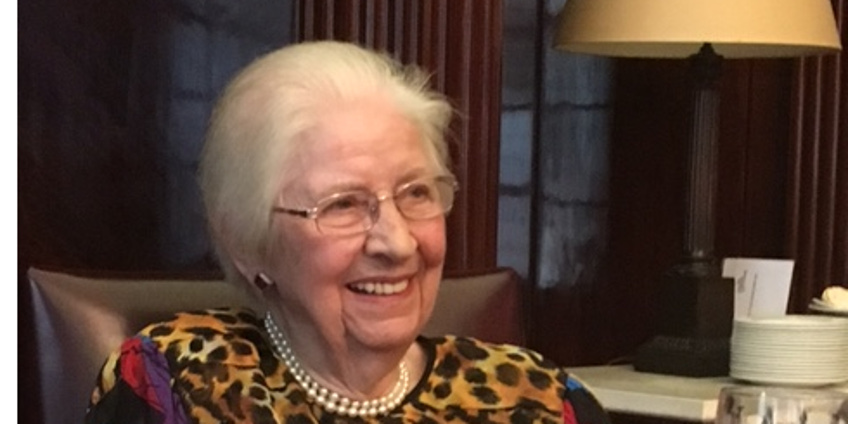 One of the longest serving World Traders celebrated her birthday at the Baltic Exchange, to which she has had a long attachment.

The Baltic arranged an amazing lunch for Inge Mitchell, with the Danish flag flying outside the building, Danish food (which came as a shock to those not used to pickled herrings), and an array of Baltic dignitaries including their Chairman and Chief Executive, plus fans from Denmark and elsewhere.

Bridging the gap between World Traders and the Baltic Exchange were Lord Jeffrey Mountevans, the 2015/6 Lord Mayor, and the Marketing Director who organised the occasion, Robin King.

Inge invited World Traders whom she had known for a long time, including several Past Masters and the current and previous Clerks, Gaye Duffy and Nigel Pullman. The Master and Wardens also attended.

The Master and Chairman both made short speeches. Robin King reminisced on stories of Inge’s time at the Baltic. But the real speech, demonstrating that she is 90 years young, was given by Inge herself.

To mark the occasion, the World Traders present gave our fellow Liveryman a Georg Jensen vase with a bouquet of flowers, with the promise of monthly bouquets for the next year. For the previous ‘flower lady’ at King Edward’s Hospital, this was more than acceptable.