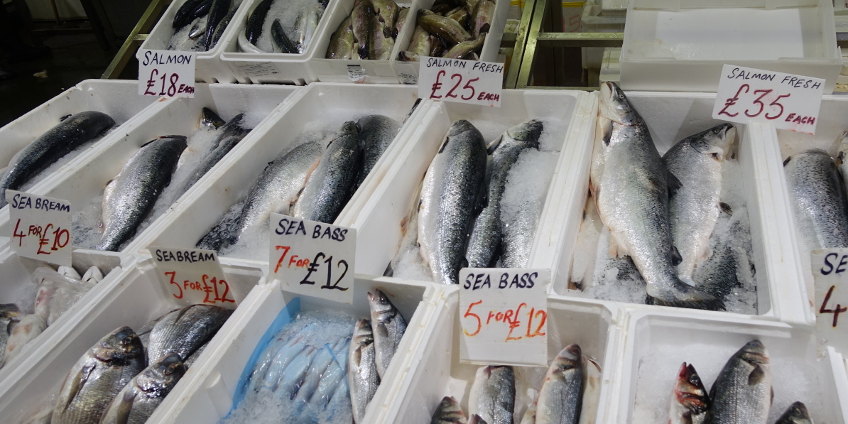 In accordance with the Master’s theme of ‘markets’, 20 World Traders rose before dawn and arrived at the world famous Billingsgate market at 7am.

Our visit was organised by the Seafood School Charity whose motto is ‘Love, Learn and Explore’. They arrange courses for 10,000 people each year, of which 50% are school children whom they wish to encourage to eat more fish. Each year, 2,500 apprentice chefs are taught how to prepare fish for the table, and major supermarkets send their staff to learn about varieties of fish.

Although the market sells 25,000 tonnes of fish per year, interestingly, a hundred years ago, over 40,000 tonnes were sold each year.

We were split into three groups and given a most fascinating tour of this very busy market where we were shown many types of fish. There are 150 varieties, of which 60% comes from the UK waters, both sea – and increasingly important today – from farms.

We learnt and were shown that the mouth of brill and turbot is on the left of the face whereas the mouth of plaice is on the right. Also shown were live eels and crabs where we looked at the womb of a crab and were told that if eggs are in there, it cannot be caught. Interestingly, the male crab is known to be tastier than the female!

Due to the cosmopolitan makeup of our country, more fish these days are coming from 60 countries, including China and those around the Indian Ocean. Provided they are carefully looked after, fish are perfect to eat up to 16 days after being caught.

We are all aware of the increasingly high price of Dover sole in our restaurants. This is due not only to scarcity, but that the French are prepared to pay considerably more than the £23 per kilo in the UK market.

The freehold of Billingsgate is owned and managed by the Corporation of the City of London who let stalls to traders, many of which have been in the same family for generations.

The Market sits in 16.5 acres of prime development land adjacent to the office tower blocks of Canary Wharf. The Market moved here in 1981 from the City and we were told that talks are underway to merge Billingsgate, Smithfield and Spitalfields into one unit outside central London. Billingsgate is open from 4am to 9am Tuesday to Saturday and retail trade is welcome.

After a hearty breakfast of kedgeree (what else!), we departed, knowing that we have learnt about another market and determined to eat more fish!