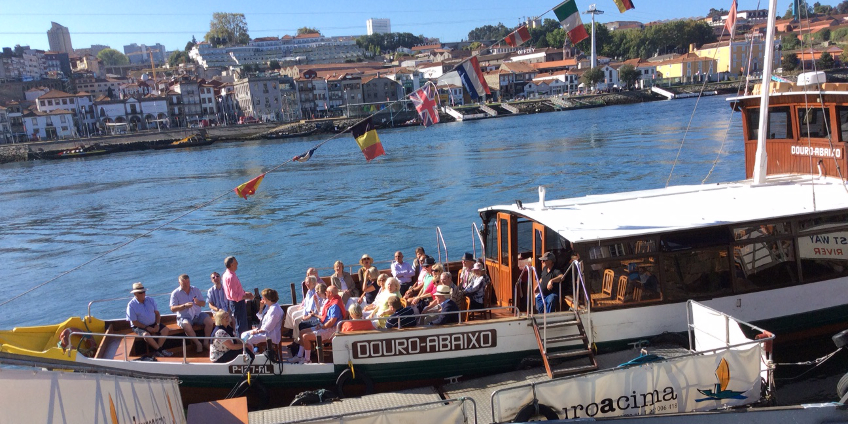 A group of 34 World Traders had the trip of a lifetime to the city of Porto in Portugal. Liveryman, Brian Howard of Wine Intelligence organised the trip with skill, efficiency and exceptional knowledge of the city, its history, and the rich heritage of this important wine region. From the beginning it was obvious that considerable thought had been given to the itinerary. This was not your normal tourist trail, we experienced magic doors that flew open at every venue to give us an insider’s view of an area steeped in history and tradition.

After the inaugural dinner at the Pestana Vintage Hotel, located in the very centre of the tourist hub, we started the following day with a morning tour of the city. Dating back to the Middle Ages, when Portugal was regarded as a world power during Europe’s ‘Age of Discovery’, the city has evolved from being an outpost of the Roman Empire into a thriving multi-cultural city with its historical core designated as a World Heritage site.

That afternoon we met with the British Portuguese Chamber of Commerce Northern Region Director, who shed light on the rivalry which exists between Lisbon, Portugal’s first city and Porto, the second largest city. The enthusiasm for growth and trade was obvious from the Chamber’s team selected to meet us. With great eloquence they explained the country’s desire to attract new business and sell Portuguese produce to existing and emerging markets.

Portugal is open for business and with a young, well-educated population there is considerable trading opportunities.

There were many highlights to this special trip, not only the friendships we made getting to know other World Traders, but the opportunity to learn about Port wine which is produced exclusively in the Douro Valley. A walk over the Douro River to the Calem Cellars was an unmissable treat. The modern museum, with an interactive tour, highlighted the history of the brand and moved on to a Port tasting in the private rooms of Calem Cellars. Our tasting of eight Ports started with a white, with each proceeding glass growing in colour until we reached the Kopke Colheita 1978 tawny Port, which glistened and smoldered in the glass like a ruby from a former Portuguese province. Our dinner in the secluded dining room in the cellar was a fitting end to a marvellous day.

The coach trip to Quinta de Aveleda, surpassed all our expectations. The Guedes family have been producing wine on the estate since 1870, but the gate and the main buildings date back to 1666. Our guide, Christina Pessoa has been working at Quinta for 31 years and knows the wonderful gardens like the back of her hand. Prince Henry the Navigator, the patron saint of Portuguese exploration, was born here. There are duck houses, goat houses and swans in the twelve acres of glorious gardens. A light lunch of four courses with a wine tasting was served on a terrace overlooking a vineyard.

Brian opened his big black book of contacts; and completely took our collective breath away with the dinner in The Factory House. Far from being a factory, the building is a Neo-Palladian mansion and reflects the 600 year Anglo-Portuguese Alliance Built in 1806. The building was temporarily occupied by the French Army and after the Peninsular Wars it was reopened in 1811 with a lavish dinner and ball in ballroom. The walls are covered with paintings and photographs of visiting nobility and it was a huge powerhouse of business for hundreds of years. Now with just 12 directors representing the seven companies of the Association, they work to promote Port wine and the centuries old traditions of the Association. Our dinner took place in two magnificent dining rooms complete with chandeliers, crystal, and the finest wines.

The second dining room welcomed us to the same place setting to serve two superlative ports and cheese. The Master presented our host, Paul Symington, Chairman of Symington Family Estates with an engraved decanter on belt of the Worship Company of World Traders to record our gratitude for wonderful evening.

It was off the seaside on Sunday after a river cruise, arriving in style in a 1900 tram which huffed and puffed up the steep hills. Our final dinner was in the CVRVV town house with magnificent views of the Douro River.

It was a classic World Traders event, stimulating, well-structured and knowledgeable, all thanks to Brian and his highly efficient partner Jenny, who treated us to a trip of a lifetime by using his expertise and familiarity of the regional to ensure we all had an experience that we will not forget.