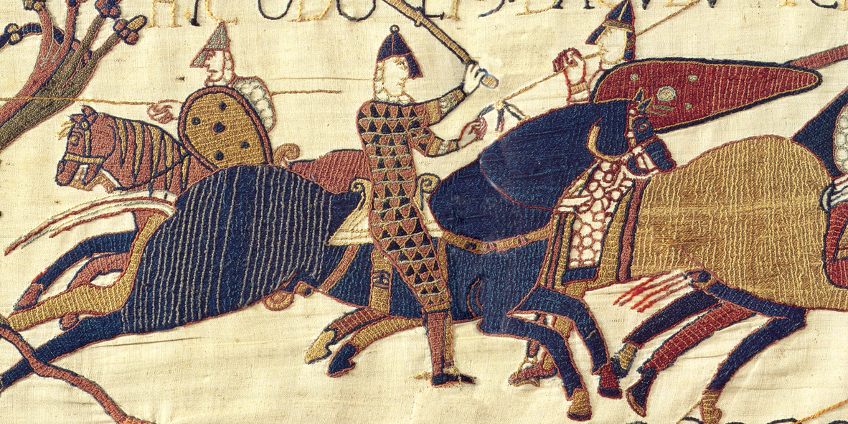 In 2016 the President of Alderney, Stuart Trought, drew to my attention a fascinating project on the island, the Alderney Bayeux Tapestry.  He wanted to gain more attention for the endeavour to promote Alderney in London.  The Alderney Tapestry was conceived by Kate Russell, an American by birth and education, British by marriage and a Channel Islander by choice.  I met with Kate and suggested a lecture in London.  However, a link between the tapestry and the Worshipful Company of World Traders hung by a thread (sic), so I raised the idea with Master Roger Sander of the Worshipful Company of Broderers.  He thought it would make a great Inaugural Lecture for them and wanted to learn a bit from our Tacitus experiences.  I also mentioned the idea to Judith Rich OBE, Honorary Secretary to Broad Street Ward Club, where I am President.  Judith asked the Carpenters for permission to use their hall and then, with great enthusiasm, Roger, Judith, and Bill Aldridge OBE, Clerk to the Broders produced:

But you might like some background.  The Bayeux Tapestry (which is of course an embroidery – Broderers are touchy about this) is justifiably one of the world’s great treasures, representing as it does our best glimpse of many aspects of life in England and Normandy in the 11th century, especially what transpired before and during the Battle of Hastings.    That something composed of perishable materials created nearly 950 years ago is still available to us today is undeniably a miracle.  No event has had such a cataclysmic effect on England as the Norman Conquest, yet the primary sources which tell us of this conquest are very few in number, usually biased and contradictory.    This makes the Bayeux Tapestry of enormous significance, though it is also full of mysteries, enigmas and riddles.

It is perhaps not generally known that the final scenes of the Bayeux Tapestry, the only pictorial record of the Battle of Hastings, were already missing when its existence came to the attention of the world outside Bayeux in the 1720’s.   The Bayeux Tapestry extends to 68,38 metres, but it is believed some 3 metres in length and 50 cms in height are missing. There is much speculation about what the missing end might have shown, though it is universally accepted that it would have shown William on his throne, both to balance other images of the Tapestry and to celebrate his achievement.

In recognition of the Channel Islands’ connection to the English crown as a result of William’s victory in 1066, residents and visitors to the tiny island of Alderney have completed a possible missing end to the Bayeux Tapestry telling in four scenes of the major events from the evening of the Battle of Hastings to William’s coronation on Christmas Day 1066.   Stitched by over 400 people – including HRH The Prince of Wales and the Duchess of Cornwall – in the same style and materials as the original, Alderney’s Finale was uniquely accepted for display in the Bayeux Tapestry Museum in 2014.

Kate, along with Pauline Black, the Artist, explored the mysteries, contradictions and enigmas found in the Bayeux Tapestry and described the events from 14th October to 25th December 1066 as well as the changes brought to England by the Norman Conquest.  It was great fun as she appealed to people encountering the history for the first time, as well as those who thought they had been rather well-informed beforehand.  It was also intriguing to hear how amateurs mastered a new subject so rapidly, and to the satisfaction of professional historians, not least scholars of Latin.  For me, one of bigger points was to pay much closer attention to the type and temperment of horse each character rode!

Naturally, we adjourned for drinks and canapés.   One of the more intriguing points raised several times during the evening was how nice it was to mix two livery company communities with a ward club community.  The evening truly exhibited joie de vivre, as they say somewhere between 1066 and 2018 somewhere between Normandy and London.