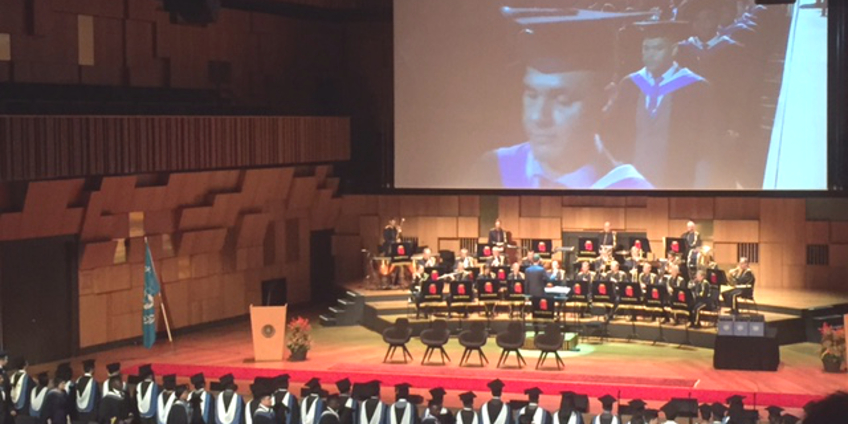 As one of the Company’s few Swedish nationals and residents, I was delighted to represent the Company at the graduation ceremony of the World Maritime University in Malmö.

Thanks to the World Traders, every year since 2016, a student has benefitted from a scholarship instituted by one of our Past Masters and managed by our Company. The Richard Charvet Scholarship is offered to a student of the Postgraduate Diploma in Maritime Law at the World Maritime University in Malmo (WMU).  The recipient is a self-funding student who gains the highest mark in the introductory module of the programme and is worth £5000 to the recipient.

The ceremony was very impressive. There were more than 800 participants involved, including about 200 receiving their certificates, from 168 nations. There were also four prominent honorary guests present:  The Deputy Prime Minister Isabella Lövin; the former assistant to the UN Secretary-General, Dr. Anders Wickman; Malmö’s Mayor, Katrin Stjernfeldt and the Secretary-General of the International Maritime Organisation, Mr. Kitack Lim.

I was very well looked after by my host Programme Director, Dr. George Theocharidis and was also presented to the President of the University, Dr. Cleopatra Doumbia-Henry. She thanked the World Traders and hoped for continued good cooperation. During the ceremony all the sponsors and scholarships were recognised.

This year our scholarship was awarded to Rocío García-Mauriño. Rocio graduated from the Complutense University of Madrid in 2010, with a double degree in Law and Business Administration. In 2014, she obtained her Masters in Law (LLM) from the University of California, Berkeley (USA).  Rocío has been a member of the Madrid Bar Association since 2011, and currently practises Corporate Law as a Partner in the legal firm Pla & Roig Aran in Madrid. She will graduate later this year.

On receiving the award, Rocio said:

‘I was of course very honoured to receive the World Traders’ Prize and it certainly had an impact on my approach to these studies. I felt a positive pressure to prove myself worthy. I have tried to do my best on the rest of the course, even though it was extremely challenging to coordinate work and studies. I cannot be more thankful to the Trustees of the World Traders for the recognition.’

‘My goal is to continue being part of the boutique firm where I have been working for over 8 years now. I was recently named a junior partner. Since one of our major clients is engaged in logistics and transport, I am sure the Postgraduate Diploma in Maritime Law will help me to be more prepared to assist them in the challenges they may face in the future and I hope I will be able to continue learning about this field, both academically and in day-to-day practice.’

The Postgraduate Diploma was launched in 2002 by Lloyd’s Maritime Academy and from 2015 it became possible to study for the diploma under a new partnership with WMU. The diploma develops academic knowledge and awareness of international trade and maritime law, increasing understanding of how commercial trade ventures may give rise to legal issues. English law is recognised internationally as a dominant legal system providing the basis for maritime and trade contracts, with London as the single most important forum for settling disputes both through court litigation and arbitration.

Past Master Richard Charvet worked in the City of London for many years in marine insurance and maritime law. His bequest of this Scholarship is a fitting legacy of his achievements and support of education in world trade.