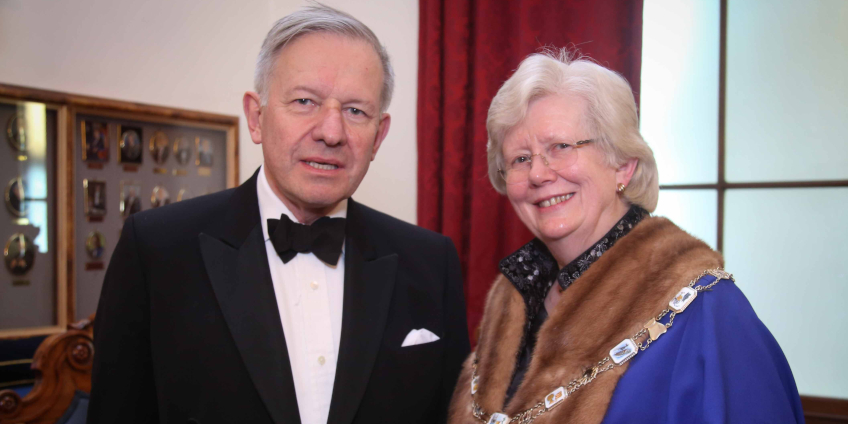 World Traders gathered on January 24th for a Ceremonial Court at Armourers’ Hall, a gem among the smaller halls in the City, to admit new Freemen and Journeymen, and to install new Court Assistant Nick Mayhew. Our Members Dinner followed, at which the distinguished guest and speaker was Sir Sherard Cowper-Coles KCMG LVO, Global Head of Public Affairs at HSBC and former UK Ambassador to Tel Aviv, Riyadh and Kabul. His chosen topic was “Strategy and Tactics: in Life and in Theory”

Quoting Sun Tzu, that “Strategy without tactics is the slowest route to victory. Tactics without strategy is the noise before defeat”, Sir Sherard ranged from the politics of the boardroom to the triumphs and disasters of a century or more of British foreign policy. Examples ranged from Ireland and India, to Palestine before and after the Second World War, to Afghanistan and Yemen today.

This Masterclass in diplomacy as the art of the unintended consequence ended with a reflection on those who had the foresight, the clear sight and the courage to stand firm at crucial points in Britain’s history. There was special mention in dispatches for Field Marshal Sir Alan Brooke (The Viscount Alanbrooke), who drove British strategy in the Second World War and kept the prime minister of the day, Sir Winston Churchill, in line and on course for a victory against at times overwhelming odds.

Questions from World Traders ranged just as wide, from the future of China to, inevitably given the times, Brexit. Sir Sherard’s remarks were off the record in their detail.

He was introduced by the Master, whose words can be read here.