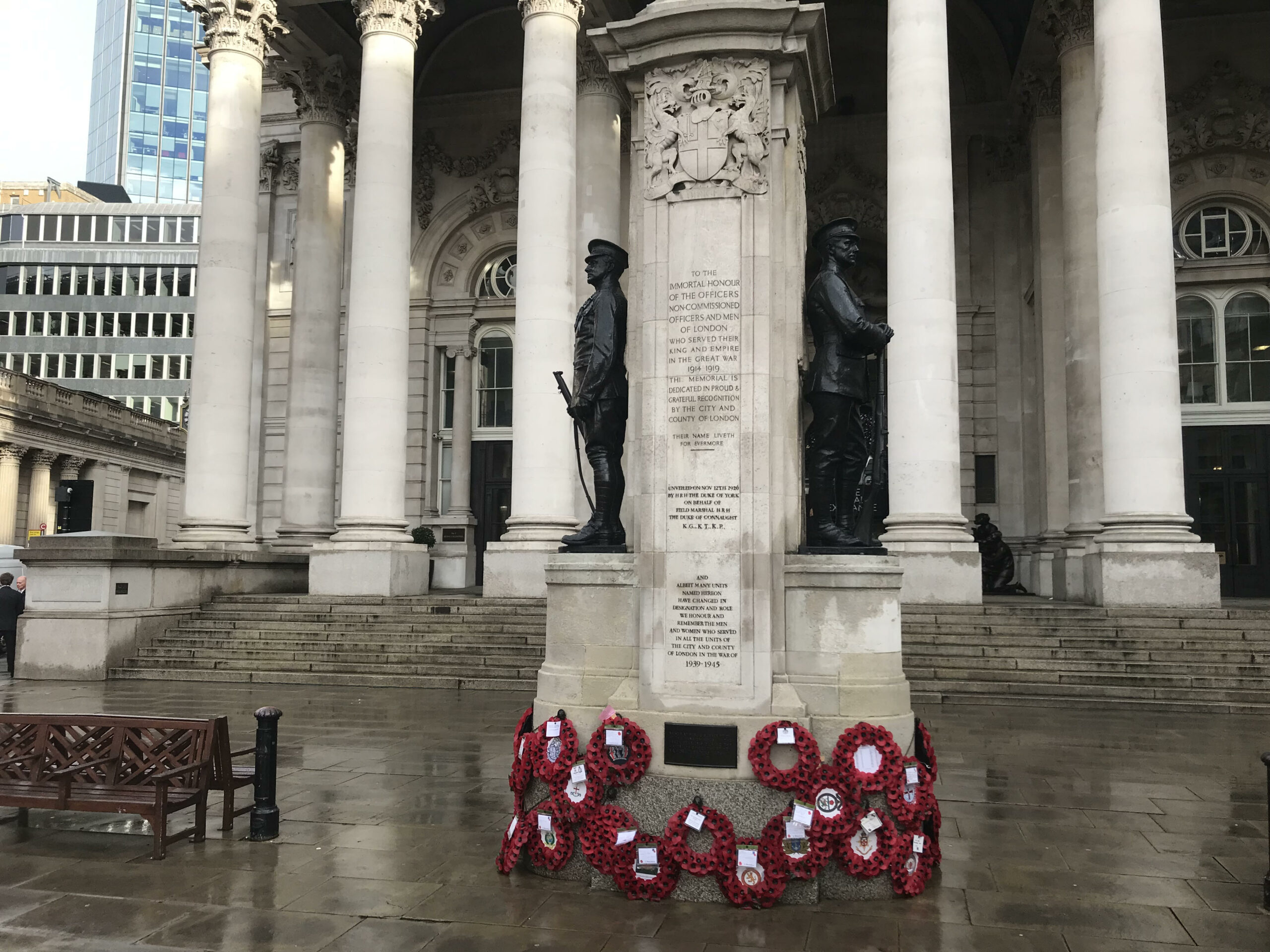 The second week in November is always a busy one for Livery Masters with Remembrance events, a new Lord Mayor, and the Lord Mayor’s Show. It’s my pleasure to update you on goings-on, and share a few pictures with you from the past month.

On Monday, 7 November, I attended a Remembrance Service at St. Paul’s Cathedral Churchyard. The majority of Livery Companies were represented, in addition to various organisations within the City itself – including the British Legion.

The Civic Party, led by The Lord Mayor, arrived and the band soon struck up. After a short outdoor service and a moment of silence, we each planted our emblems. I was especially proud to plant a Star of David on behalf of the World Traders.

In the early evening, it was time for a Thanksgiving Service in the wonderful church of St. Stephen Walbrook for the then soon-to-be outgoing Lord Mayor, Alderman Vincent Keaveny. A very musical service and an excellent sermon was followed by a reception within the church itself. With its magnificent dome, and historic ambience, the church is an architectural masterpiece, and I would encourage you all to visit if you can.

On the Friday afternoon, we assembled in Guildhall for The Silent Ceremony, where Alderman Nicholas Lyons became Lord Mayor of London. After a procession of the Alderman and City Dignitaries, Sheriffs and the outgoing and incoming Lord Mayors, the medieval court commenced. It was very impressive and follows a centuries-old format, showing the traditions of the City at its very best.

Groups from the Companies that the Lord Mayor and two Sheriffs belong to then filed into the Guildhall Art Gallery for the Presentation of Addresses. World Traders had a party of 10, and I had the pleasure of presenting Sheriff Andrew Marsden with a print of the Wards of the City of London from the mid-1920’s.

After a splendid reception in The Old Library, most of the World Traders group went out for dinner and a very good evening was had by all.

We were up early the next morning for The Lord Mayors Show, which was a splendid day. I would strongly encourage you to read this fantastic write-up from member, Kelvin Mills.

As a Master with a connection to Sheriff Andrew Marsden, I joined 21 other Masters, forming an honour guard to welcome the Lord Mayor back to The Mansion House after the show where we lunched – rather a nice place for The Master’s Consort to celebrate her birthday!

On Remembrance Sunday, we drove back into the City for the Service in St. Paul’s Cathedral. This was incredibly moving, in sublime surroundings, with wonderful music. Poignantly, The Last Post finished exactly as the bells chimed at 11am.

The Masters then processed down Cheapside for the wreath-laying ceremony at Royal Exchange led by the Lord Mayor. The Master Fruiterer laid a wreath on behalf of all Livery Companies, and I was honoured with being invited to be one of 10 Masters to stand on the steps of The Royal Exchange. After the short ceremony, we returned to Guildhall for a splendid Cook and Butler Sunday Lunch.

It was the most amazing few days, and something that I was privileged to be attending and honoured to represent the Company. These were truly days that will stay in my memory for many years to come.